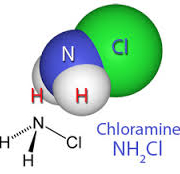 A clean, clear, correctly balanced, healthy pool should not smell in the slightest of chlorine. If there is a strong chlorine smell coming from the pool then it is an indication that something is not as it should be. It isn’t however what most people believe the problem to be. It isn’t because the level of chlorine is too high, in fact it’s opposite and the smell is caused by a compound called a chloramine.
The three types of chloramines are monochloramine, dichloramine, and trichloramine which are formed in the swimming pool when chlorine reacts with sweat, urine and other nitrogen compounds in the water.
Monochloramine is the product of the first part of the reaction between chlorine and ammonia and is not much of a problem as it acts as a disinfectant itself. Monochloramines in turn are converted into dichloramines and trichloramines and these two are the compounds that produce the strong chlorine small and can irritate they eyes and nasal passages when their levels rise. Trichloramine has a high toxicity level, is insoluble and is therefore likely to exist in a vapour form which being four times heavier than air sits just above the water level where bathers are breathing.
These compounds are known as combined chlorines and it is important to ensure that their levels are monitored and correctly maintained otherwise your pool will become very unpleasant to swim in.
2nd August 2016/0 Comments/by Chris Myton
https://pugliapools.com/wp-content/uploads/2019/12/7759943_orig.jpg 174 200 Chris Myton https://pugliapools.com/wp-content/uploads/2020/01/PugliaPools_LOGO-300x77-1.png Chris Myton2016-08-02 00:00:002020-01-02 19:41:40Chloromines﻿
0 replies

Want to join the discussion?
Feel free to contribute!

End of the season offer﻿